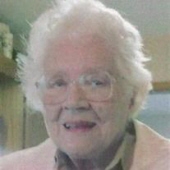 Elaine Frances Brewer, 97, a longtime resident of Beckley, died May 1, 2012, at the Villages at Greystone after a long illness.

She and her late husband, Fred Brewer, founded and operated Brewer Distributing in Mabscott.

She was born in Pence Springs on April 21, 1915, to Ira and Callie Earles Garten.

Besides her husband, Fred, she was preceded in death by her sisters, Mona Garten “Peggy” Galaspie and Noka Faye Farley.

Service will be 2 p.m. Saturday, at Calfee Funeral Home, Beckley with the Rev. Don Snyder officiating. Friends may call one hour before the service. Burial will be in Sunset Memorial Park. In lieu of flowers friends may make a memorial gift to First Christian Church.