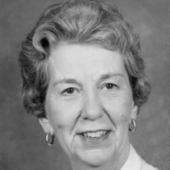 Mrs. Puckett, age 98, was born December 20, 1917 in Rome, NY, to Clarence Brown Wohr and Nina Louise Winter Wohr. She moved with her parents to Abingdon, VA, and then to Johnson City, TN. After she graduated from high school, her family moved to Lynchburg, VA, where she met George Theodore “Doe” Puckett on her very first day in Virginia, September 1, 1936. At that time, he owned a service station near her aunt’s home in Gladys, VA, where she and her family were staying for the first few days. The next weekend “Doe” took her to a dance with the Guy Lombardo Orchestra and as she would say, “The rest is history.” A year later, Mr. Puckett’s brother-in-law, Francis Barksdale, asked him to come to Beckley to manage the plumbing and heating department at the Raleigh Hardware. They were engaged that Christmas and married on October 1, 1938. Dot and Doe spent 67 years together in Beckley, almost 50 of them in the house they built on Skyline Drive where they raised their two children. Mr. Puckett preceded her in death on February 10, 2006.

Mrs. Puckett enjoyed flower arranging, sewing, knitting and other needlework. She made many of her own clothes and knitted sweaters for her children, grandchildren, and other children in third-world countries. Her legacy of needlepoint work can be seen in 30 feet of altar rail cushions at St. Stephen’s Episcopal Church here in Beckley. A lifelong Episcopalian, for many years she sang in the choir, served on the altar guild, and chaired activities of the churchwomen at St. Stephen’s.

In addition to her husband and parents, Mrs. Puckett was also preceded in death by her brother, Clarence B. Wohr, Jr. She is survived by her daughter, Shirley Puckett Kuhn, of Washington, NC, her son, George T. Puckett, Jr., of Greer, SC, three grandsons, Jonathan Randall Kuhn of Greenville, NC, Jason Thomas Kuhn of Cary, NC, and Jeremy David Kuhn and his wife Melissa Bonner Kuhn of Foxfire, NC, and one great-grandson, Jackson Bonner Kuhn, also of Foxfire, NC. She will also be greatly missed by her long-time caregiver, Louise Maddy of Shady Spring.

Following a private service for the family, her ashes will be interred in the Memorial Garden and Columbarium at St. Stephen’s. Calfee Funeral Home is serving the family at this time. Memorial gifts may be made to St. Stephen’s Episcopal Church, 200 Virginia Street in Beckley.

Arrangements by Calfee Funeral Home, Beckley.
To order memorial trees or send flowers to the family in memory of Dorothy May Puckett, please visit our flower store.