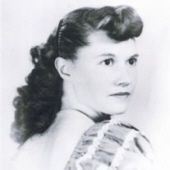 Christine Tankersley, 86 of Beckley WV, went to be with the Lord Wednesday, March 12th 2014. Born September 15, 1927 in Albany, KY, she was the daughter of the late John and Belle Stockton Reeder. In addition to her parents she was preceded in death by sister, Mary and Martha and by a brother, William.
Christine was a homemaker and a member of the Crab Orchard Baptist Church. She is survived by her husband Edward; sons Richard Tankersley and wife Talitha and Terry Tankersley and wife Sherry; two grandsons Adam and Steven Tankersley; great-granddaughter Isabelle a brother, Herman Reeder.
Services will be held at 2.00pm Friday, March 14, 2014 in Sunset Memorial Park Mausoleum B with Pastor Wayne Peters officiating. In lieu of flowers donations in Christine's name can be made to the Bradley Freewill Baptist Church, Box 307, Bradley, WV 25818.
On line condolences may be left at www.calfeefh.com
Arrangements by Calfee Funeral Home, Beckley.
To order memorial trees or send flowers to the family in memory of Christine M. Tankersley, please visit our flower store.