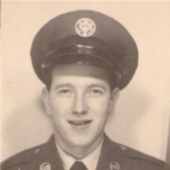 Charley Waitkus, 81, of Crab Orchard passed away Sunday, January 22, 2017 in Charleston. Born January 12, 1936 in Lester, WV he was the son of the late Frank and Mary Jarvis Waitkus and stepmother Merle Strickland Waitkus. Besides his parents, Charley was preceded in death by a brother, Edward Raymond Chesser.

After graduating from Trap Hill High School Charley joined the Air Force where he served for six and a half years obtaining the rank of Staff Sergeant. After serving his country, Charley returned home to West Virginia to pursue his education. He attended Beckley College, received his Bachelor Degree from WVU Tech and Masters Degree from Marshall University. Charley was a teacher at Woodrow Wilson High School for 30 years and enjoyed fixing things in his spare time. He was known as Mr. Fixit around family and friends.

A visitation will be held from 12-1 pm on Wednesday, January 25, 2017 at the Calfee Funeral Home Chapel with burial following directly afterwards at Sunset Memorial Park.

Arrangements by Calfee Funerla Home, Beckley.
To order memorial trees or send flowers to the family in memory of Charley Waitkus, please visit our flower store.