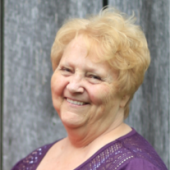 Carolyn Mae Kirby Via , age 70, passed away on August 23, 2017 at the Bowers Hospice House of Southern West Virginia. Born December 25,1946 in Pemberton, West Virginia, she was the daughter of the late Joyce Buchanan and Glen Kirby.

In addition to her parents she was preceded in death by her stepfather Lewis Buchanan, sister Pamela Thorpe, and brothers Rick Kirby, Terry Kirby, Timmy Kirby and Michael Bell.
Carolyn is survived by daughters Michele Via Denny and husband Brian of Huntersville, North Carolina and Angela Via Hairston and husband David of Ona, West Virginia and grandchildren Chelsea Dufour of Beckley and Alexander Denny of Huntersville, North Carolina. She is also survived by her sister Jonnie Coccioli of Maryland, brothers Sam Kirby, John Kirby and Michael Kirby all of Delaware. She also leaves to cherish her memories a great granddaughter Journey Grant of Beckley.

She graduated from Woodrow Wilson High School in 1964 and Beckley College with an Associates degree. Carolyn worked at Lilly Ice and Bottling with her mother and stepfather for many years as a bookkeeper. She then took a position at Glasrock and moved to Raleigh General Hospital where she served as an emergency room registrar. She then took a position as an Account Technician with the IRS where she worked until retirement in 2014.

Carolyn looked forward to retirement as she got the opportunity to spend lots of time with her first born great grandchild. She treasured the time she spent with Journey, her blue sky, as they bonded and shared secrets whispering in one another‘s ears often. She also greatly enjoyed time with family and vacations to the beach. Carolyn has many friendships formed through the various jobs she held as well as the CB Radio club she was a member of for many years. Carolyn was baptized at an early age and reconfirmed again as her young daughters began to attend church in Beckley.
Carolyn enjoyed attending concerts with friends and family as well as watching movies. She also took a strong liking to the WV Miners and often attended the baseball games with her great friend Debbie. Carolyn was known for her love of football and baseball. She engaged in a variety of activities as her daughters grew up which included dance, volleyball, and band. Carolyn was always in the stands or on the sidelines cheering them on.

Her family and friends will always remember her as a caring and light-hearted person. Carolyn treasured her children and grandchildren over the years. She had very special friends: Carmen, Debbie, and Jennifer who will cherish her memory as well. Carolyn has a host of nieces, nephews, and other family.

A service of remembrance will be at 6:00pm Friday August 25, 2017 in the Calfee Funeral Home Chapel with Rev.Timothy Hairston officiating. Friends may visit with the family from 4:00pm until service time on Friday.

The family suggest that memorial contributions be made to the Bowers Hospice House, 454 Cranberry Drive Beckley, WV 25801.

The family would like to thank Hospice for their care and attention to her comfort during her final days on earth.
To order memorial trees or send flowers to the family in memory of Carolyn Mae Via, please visit our flower store.