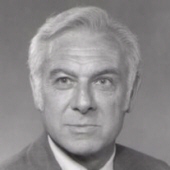 Boyd Curtis Humphrey, Sr., 88 of Beckley passed away Saturday, May 31, 2014. Born December 26, 1925 in Surveyor, he was the son of the late Samuel Joseph and Eva Lafferty Humphrey. In addition to his parents he was preceded in death by his first wife, Maxine Humphrey.
Boyd worked for the Raleigh County Board of Education for many years. He started his career at Marsh Fork. He taught math at Woodrow Wilson and was a guidance counselor and Vice Principal at Beckley Junior Hugh. Following his teaching career Boyd was a sales representative for the Houghton Mifflin Co. He was a member and former deacon of the First Baptist Church, Beckley where he served on the board of trustees and was a former Sunday school teacher of the Barraca Class. Boyd was a member of the American Legion and volunteered at the Beckley VA Medical Center.
He is survived by his wife, Ina Jennings Humphrey; daughter, Lynn Noyes and husband Walt of Oak Hill; son, Boyd “Chip” Humphrey, Jr. and wife Maryann of Beckley; grandchildren, Neil Humphrey and wife Brittany, Daniel Humphrey, Laura Suzanne Noyes, Andrew Noyes; brother, Lloyd Humphrey and wife Eileen of Durham, NC; step children, Patricia Ann Peterson and husband John of Abingdon, VA, Charles Jackson Fields and wife Irene of Berkley Springs, WV; step grandchildren, Stephanie Swanson and husband Steven, Samantha Lemasters and husband Todd, Christopher Peterson and wife Tanna, Andy Fields and wife Jennifer and 9 great grandchildren.
Funeral services will be conducted at 11:00 a.m. Monday, June 2, 2014 in the Calfee Funeral Home Chapel with Rev. Doc Adkins officiating. Entombment will follow in Sunset Memorial Park. Friends may visit with the family one hour prior to service on Monday at the funeral home.
Grandsons will serve as pallbearers.
The family suggests that memorial contributions be made to the First Baptist Church, 422 Neville St., Beckley, WV 25801
On line condolences may be left at www.calfeefh.com
Arrangements by Calfee Funeral Home, Beckley.
To order memorial trees or send flowers to the family in memory of Boyd Curtis Humphrey, Sr., please visit our flower store.