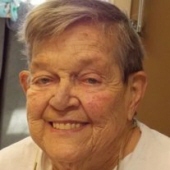 Bettina Virginia Breeden (Snootie, Toonie) King went to be with the Lord suddenly at 9:14 p.m. Saturday, November 30, 2013. She was born on March 29, 1927 at home in Glen Hedrick, now Beaver, WV. She was the youngest of 7 children born to the late Joseph Henry Breeden and Roxie Allie Narcissus Chissum Pack Breeden.
She was a 1944 graduate of Shady Spring High School and attended Beckley College.
She married the late Joseph Ellis King, Sr. of Lyman, MS on February 8, 1952 in Daniels, WV. They met at the Beckley Veterans Administration Hospital where they both worked and she was one the first employees hired.
Her two children survive her. Her son, Joseph Ellis King, Jr. and his wife Martha of Houston, TX and her daughter, April Dianne King of Daniels with whom she made her home; one grandson, John and his wife Susanne and 2 great grandsons, Carsten and Christian and by her beloved dogs Daisy and Bandit along with her service dog Cessna.
She worked most of her life as a legal and medical secretary and lived with her family in New Jersey, Ohio, Louisiana, Mississippi and Texas before again making West Virginia home for the last 30 years.
She was an avid horsewoman, dog and cat lover and loved the outdoors and traveling to 48 of the 50 states and Canada in her RV. She loved working and playing on the computer and blogging with friends.
She was preceded to heaven by her parents and 3 sisters, Cora Mae Breeden Pettry, Fay Olivia Breeden Meador, Gaye Breeden Lewis and by her 3 brothers, Henry Myrl Breeden, James Breeden and Jack Charles Breeden, Sr.
She is also survived by nieces and nephews, Freda Krise, Margaret Pettry, Peggy Turner, Martha Butts, Bobby Pettry, Lois Covey, Dotty Gaye Kantor, Mary Lee Cromer, Ginger Smith, Jimmy Breeden and Karen McLeod along with many great and great- great nieces and nephews.
The family would like to give a special thanks to the angels at Raleigh General Hospital, Rhonda’s Pharmacy and the most caring Dr. Todd Bramlee.
Funeral services will be conducted at 2:00 p.m. Friday, December 6, 2013 at the Gospel Chapel, 1134 C&O Dam Rd., Daniels, WV with Pastor Luke Richmond officiating. Burial will follow in the Phillips Cemetery at Shady Spring. Friends may visit with the family from 6-9 p.m. Thursday at the Calfee Funeral Home, Beckley.
On line condolences may be left at www.calfeefh.com.
Arrangements by Calfee Funeral Home, Beckley.
To order memorial trees or send flowers to the family in memory of Bettina Virginia King, please visit our flower store.