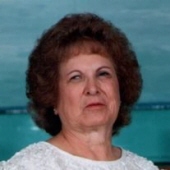 Arbadella (Farley) Phillips, 77, of Coal City, passed away Thursday, May 15, 2014 following a long illness. Born December 22, 1936 in Coal City, she was the daughter of the late Earl and Clotine Bailey Farley. In addition to her parents she was preceded in death by her husband, Stewart Phillips; sisters, Clara Golden, Phyllis Farley and Rose Cline. She was a member of Sunset Hills Missionary Baptist Church in Coal City.
Arbadella is survived by her daughter, Keri Hart and her husband Phillip of Coal City; grandchildren, Nicholas Hart and wife Samantha of Teays Valley, WV, Andrew Hart, Chloe and Payton Hart all of Coal City; sisters, Willa Derenge of Leonard, MI and Reva Bailey and husband Delbert of Beaver, WV; brothers, Keneth Farley and wife Mahin of Manassas, VA and Lacy Farley and wife Betty of Fairfax, VA; great-grandsons, Kaiden and Easton Hart of Teays Valley, WV and special friend, Stella James.
Funeral services will be held at 7:00 p.m. Sunday, May 18, 2014 in the Calfee Funeral Home Chapel with Pastor Melvin Jamison officiating. Friends may visit with the family from 5:00 p.m. until time of service Sunday at the funeral home. A committal service will be 11:00 a.m. Monday, May 19, 2014 at Blue Ridge Memorial Gardens.
The family suggests memorial contributions be made to the American Cancer Society,
P.O. Box 22718, Oklahoma City, OK 73123-1718
Online condolences may be left at www.calfeefh.com.
Arrangements by Calfee Funeral Home, Beckley.
To order memorial trees or send flowers to the family in memory of Arbadella Phillips, please visit our flower store.