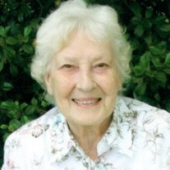 Anna Opal Richards, 90, of Beckley, passed away Sunday, October 6, 2013 at her residence. Born February 22, 1923 at Island Creek, WV, she was the daughter of the late Zachariah Taylor and Emma Jane Smith Blankenship. In addition to her parents she was preceded in death by her husband, Mason L. Richards and a grandson, Johnny Isbell. She was the last surviving member of her immediate family.
Anna had a strong devotion to her family and loved the time she was able to spend with them. During World War II she was a Rosie the Riveter making tail fins for bombs for General Machinery Ordinance Corporation at the Naval Ordinance Plant in S. Charleston, WV. After the war she became a homemaker but worked for a while as a hostess at the Beckley Glass House.
Survivors include her sons, Curt Richards and Troy Richards and his wife Connie both of Beckley; nephew whom she raised as a son, Paul Isbell and wife Ginny of Columbia, SC; grandchildren, Patrick and wife Beth Richards of Crab Orchard, Michelle Cochran and husband Brad and Marshall Richards of Beckley and James Isbell; great-grandchildren, Daniel and Allison Richards, Ellen Cochran, Alexandra and Taylor Richards and a special caregiver, Dixie Thompson.
A funeral liturgy will be held at 1:00 p.m. Thursday, October 10, 2013 at St. Francis deSales Catholic Church, 614 S. Oakwood Ave., Beckley with Monsignor Samuel Sacus officiating. Burial will follow in Blue Ridge Memorial Gardens. Friends may visit with the family from 11:30 a.m. to 12:45 p.m. at Calfee Funeral Home, Beckley.
Family and friends will serve as pallbearers.
Anyone wanting to make a memorial contribution instead of flowers may do so to Hospice of Southern West Virginia, P.O. Box 1452, Beckley, WV 25802.
Online condolences may be left at www.calfeefh.com.
Arrangements by Calfee Funeral Home, Beckley.
To order memorial trees or send flowers to the family in memory of Anna Opal Richards, please visit our flower store.